I should be embarrassed to admit this, but it wasn’t until I became a driver myself that I knew what the hazard light button was. I remember noticing it for the first time in my stepmom’s little red Civic, the newest vehicle I had ever been in and thus the epitome of technological advancement in automobiles. I saw that red triangle button on the dashboard among dozens of other doodads and whatnots I didn’t understand, but the imagery of it was such that I instinctively knew it meant “DANGER”. This could only mean one thing, of course: an eject and/or self-destruct button. Like Batman. I was always very careful in the front seat, afraid that I might inadvertently hit it while changing radio stations and send us both flying into oncoming traffic. This story doesn’t really have an application, I just wanted to share it. 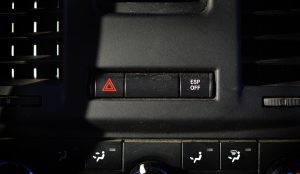 I was reminded of it when my own daughter asked a few weeks ago what the red triangle button meant. “They’re for when you have a problem, ” my husband explained, “so people know to move away from you.”

My husband is the most selfless person you’ll ever meet, so this isn’t a reflection on his character, only on what the hazard lights have come to mean: when did “I’m in trouble” become “move along”? Hazard lights are intended to alert the other drivers that something has gone wrong with the car or driver, that they can’t go on as normal or at the same rate as the others on the road. Their distress signal has become an annoyance to others. Rather than pulling over to offer help, the other drivers see the blinking red lights and move off to the side in an attempt to get past them quicker. We see the trouble and worry only about how it affects our commute.

I once sat on the side of a highway for more than 6 hours with my hazard lights blinking. 6 hours. I’d experienced a tire blow-out going 70 miles per hour and miraculously maintained enough control to safely come to a stop on the shoulder, yet I did not have the knowledge, skills, or tools to change the tire. I made phone calls until my cell phone died (the car charger was still years away from being common), I missed all of my college classes that day, I was starving, exhausted, scared, frustrated, angry. I waited and waited while hundreds of cars passed me by, not one stopping to offer assistance. Could they have been a crazy axe-murderer who wanted to chop me into tiny bits? Sure. Those exist anywhere. But could they also have helped? Yes. But no one did. Despite the very obvious signs I was giving that I needed it.

“But Jennifer,” you say, “I don’t have time to stop and help a stranded motorist!” Well, friend, I can promise you that the stranded motorist probably didn’t have time to be stranded themselves. They had work and appointments and responsibilities still waiting for them, too. How much faster would they get to where they were headed, how much faster would the flow of traffic be restored if someone took the time out of their own schedule to just help?

“But Jennifer,” you say, “I don’t know how to fix a car!” Well, friend, sometimes just having someone there with you can ease the stress of a motor emergency. My stepdad was in a car accident a while back, a bad one. It was raining and he was alone, trapped. I can’t imagine how scared he must have been, let alone hurt. The wreckage made it impossible to reach his cell phone to call for help, he must have been there wondering if anyone saw, if anyone noticed, if anyone was coming, if anyone would help. Alone. Until some wonderful Samaritan took it upon themselves to climb in there and keep him company, keep him calm, until help arrived. Someone took a detour from where they were headed, got out into the rain, and comforted someone who was very much alone. Someone saw the hazard and responded.

You probably see by now that I’m not just referring to car troubles.

It applies across the board to life. The depressing social media shares, the mother juggling groceries and children in the parking lot, the elderly neighbor who can’t start their mower, the overweight first-timer at the gym who can’t figure out how to start their machine. People need HELP. Hazard lights are blinking all around us. Yet all too often we just rubberneck the wreckage, slow down long enough to see how bad it is, thank God it wasn’t us, and move on. We glare at the man whose car won’t start in the middle of an intersection, as though he didn’t already know he was inconveniencing the people behind him, when getting out to help him push the car would be much more impactful. We silently judge the single mother who can’t pay her bills when a helping hand, a tank of gas, or a night of babysitting would be much more helpful. We hate the way our depressed acquaintance makes us feel so down when they’re around, when helping them feel better when we’re around could be the difference between life and death. The mom you’re scoffing at for using formula – did you offer her breastfeeding support? The man you’re taking cell phone pictures of because his pants are slipping down – did you tell him and save him the embarrassment? The friend whose marriage is crumbling – have you offered an ear or just observed the wreckage? The relative who is battling a disease – have you visited, listened, helped, or just thanked God it wasn’t you?

People all around us need help, every day. It could be as easy as sharing a post from a friend’s business or as involved as taking in a family.

“But Jennifer,” you say, “I’m having car trouble, too.” I know, friend. Depression and anxiety are all around us. Financial struggles, relationship battles, health troubles, existential crises, kids, school, work… we’re all struggling. I know. And sometimes all you can do is climb inside the broken-down car and cry together. Acknowledging someone else’s struggle does not negate your own. There’s no way to measure who has it worse, nor should there be. We’re all in this together, all traveling the same road, and we all benefit when someone in need is helped.

There’s an actual, documented phenomenon known as the Bystander Effect. In a crisis, individuals are less likely to offer help to a victim the more people there are around. Seriously. The MORE bystanders there are, the LESS likely anyone is to offer any help. Victims will wait and wait for help that doesn’t come because everyone around them assumes someone else will do it. It’s mass apathy. It takes someone taking charge and giving specific instructions to specific people to get anything done. You can’t just yell, “Somebody call 911!”, you have to point to a person and say, “YOU, call 911.” While I’ve seen this portrayed several times on the always-accurate Law & Order: SVU, I recently witnessed it first-hand. I was in a situation that required police interference, and people just stood there. Watching. Some were in disbelief, some had their cell phones out to video. I had to be the one to call the police, because the bystander effect was in full force.

This idea, this stopping to help when others don’t, it’s important enough to have made the Bible. In Luke 3 we’re told of the Good Samaritan, the man who stopped and offered assistance when so many others before him didn’t. Jesus Himself offered up everything He had for the good of all of us. You may not have riches, you may not have influence, you may not have extra time, but if the Son of God can offer Himself to help everyone, even the jerkiest jerks and the buttiest buttheads, who are we to just keep on driving by? When did “I need help”, when did “love your neighbor as yourself”, become open to interpretation, prioritization, and impassivity?

We cannot live this way. We cannot allow our dependency on others to rid us of any responsibility. We cannot see flashing hazard lights and shrug because they don’t affect us. People need help, WE need help. So what are you going to do about it?