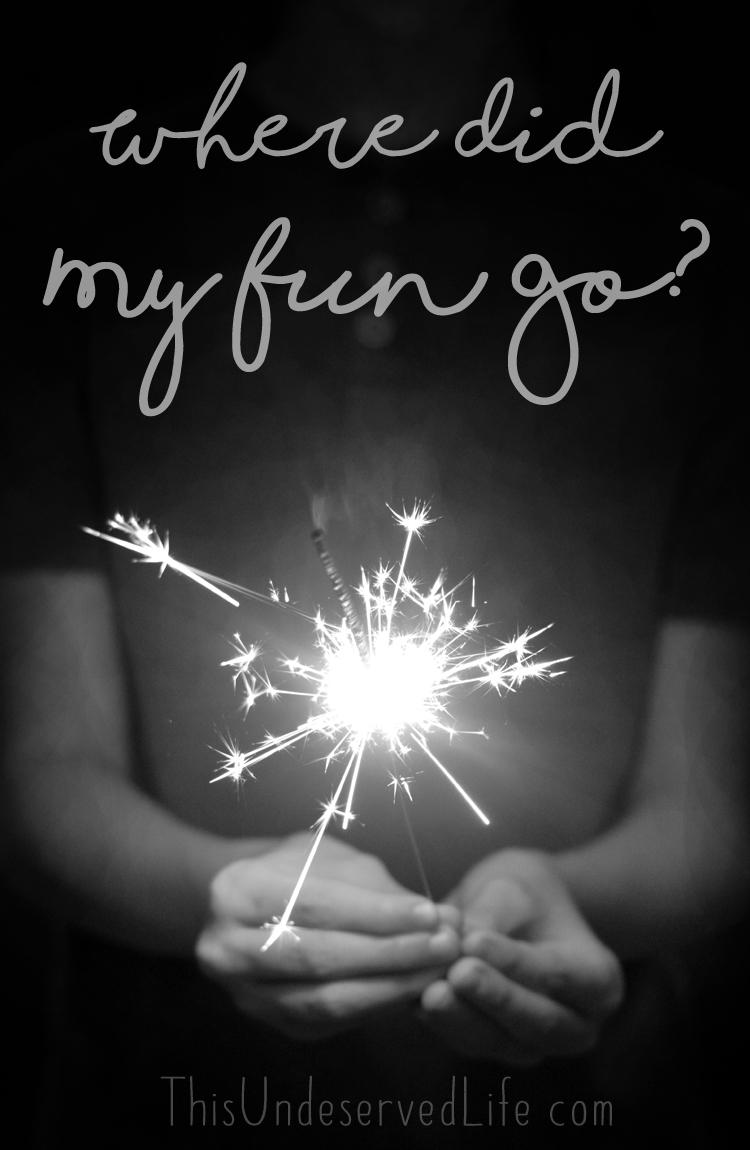 Last week I had a quick conversation with friends, a few of them I’ve known for years. We were joking about this, laughing about that, when one of them said, “I remember the exact time I realized you were funny.” He described a time when I was, indeed, very funny, because let’s face it, I can be a hoot. We laughed at the memory of it, I gave him a hard time about how he’d known me for two years (!!!!!) before that occasion when he finally noticed that my jokes were good, and we went on our merry way, me with that I-just-spent-time-with-adults glow.

Later that night, it hit me.

He’d known me two years before he found out I was funny. Granted, I hadn’t spent every day of two years with this friend, but surely I’d made some kind of wise crack, right? It’s kind of my thing, after all. Had my jokes been bad? Did my timing miss a step? Did I stumble into some bad lighting? (Clueless reference.) No, I realized, that wasn’t it. My humor had been fine, it was me who wasn’t. Because every time I’d been around that friend, every encounter we’d had over those two years, I’d had my kids with me. He hadn’t seen me be funny because he’d seen me being a mom.

He hadn’t seen me, he’d seen the overtired, hypervigilant, herding, correcting, feeding, deep-sighing version of me.

Every encounter I’d had with this friend had not been me at my best, or my most comfortable. I hadn’t felt free to joke because I’d been bound by fatigue, schedule, mentally keeping track of how many packages of fruit snacks I’d already let the kids have. I wasn’t fun, I was frazzled.

So when did I lose my fun?

Did it get lost underneath the pile of unmatched socks?

Did it stay in bed when I had to get up so many times in the night?

Did I lose it when all the articles popping up made me aware of dry drowning and how I had to observe my kids for every second of an entire week after they submerged their heads in water?

Did the fun get lost between the lines of ingredients I read, both fearful of the allergens that could harm my children and trying to make sense of the latest ones I’m supposed to avoid?

Maybe I lost my fun when defending parenting choices became a part-time job for us all, when it suddenly took as much time to stand up for ourselves as mothers as it did to research alternative methods to what we’d been doing, since that latest article just detailed why we’ve been doing it so horribly wrong.

Did it feel left out between doctor appointments, cancelled date nights, trips to the schools, refereeing siblings, scrubbing stains out of brand-new clothes, price-matching brand-new shoes, or cleaning more pee than any 3 small humans should ever be able to produce?

*whispers* Was it delicate and I accidentally washed it with the towels?!

I wonder if it’s stuck between the pages of one of those books I started but haven’t been able to finish.

Maybe it’s in the backpack I’m pretending isn’t stuffed into the closet, still full of locker contents from the end of last school year.

I hope I find it when I’m purging for the next garage sale.

My fun could very well be shivering in the back of the fridge, either trapped in a dish of leftovers or wedged between the long-expired ingredients I bought to try a Pinterest recipe.

Is it an early bird and I’ve just missed it? Is it away and I haven’t been able to visit? Is it in the dust, the crumbs, the dish water, the lint trap, the mulch, the soot, the empty photo albums I’ve yet to fill? Could it be in my instrument I haven’t played in forever? Could it be in the gym clothes I haven’t seen in too long?

I’m not sure where it went, I don’t know how to find it. But I won’t stop looking now that I know that it’s gone.

Because as much as I wish my friend had known my humor those two years, I wish my kids had seen it more.

I’m going to chance that it’s in the bucket of water balloons I’m about to unleash. Or maybe in the fort we’re going to build. Perhaps I’ll find it in the extra laughs I’ll make time for after bedtime has passed. Maybe it will show up if I don’t rush dinner. I hope it comes back if I watch that movie with the kids. I’m even willing to roll the dice on it being lost somewhere in Minecraft. It’s not on my schedule, so I’ll stop looking there. It’s not on Facebook, or Instagram, or even on Pinterest. It could be in that mess I haven’t wanted to make, the project I haven’t made time for. It might be in the dirt, in the mud, in all the things I’ve found imperfect. It’s not in my laundry or I would have found it by now, so maybe it’s in a place I haven’t been in too long – or a place I’ve yet to go.

Wherever my fun went, I’m determined to find it. My kids deserve more, I deserve more, and dag nabbit, I’ve got some great jokes to share.