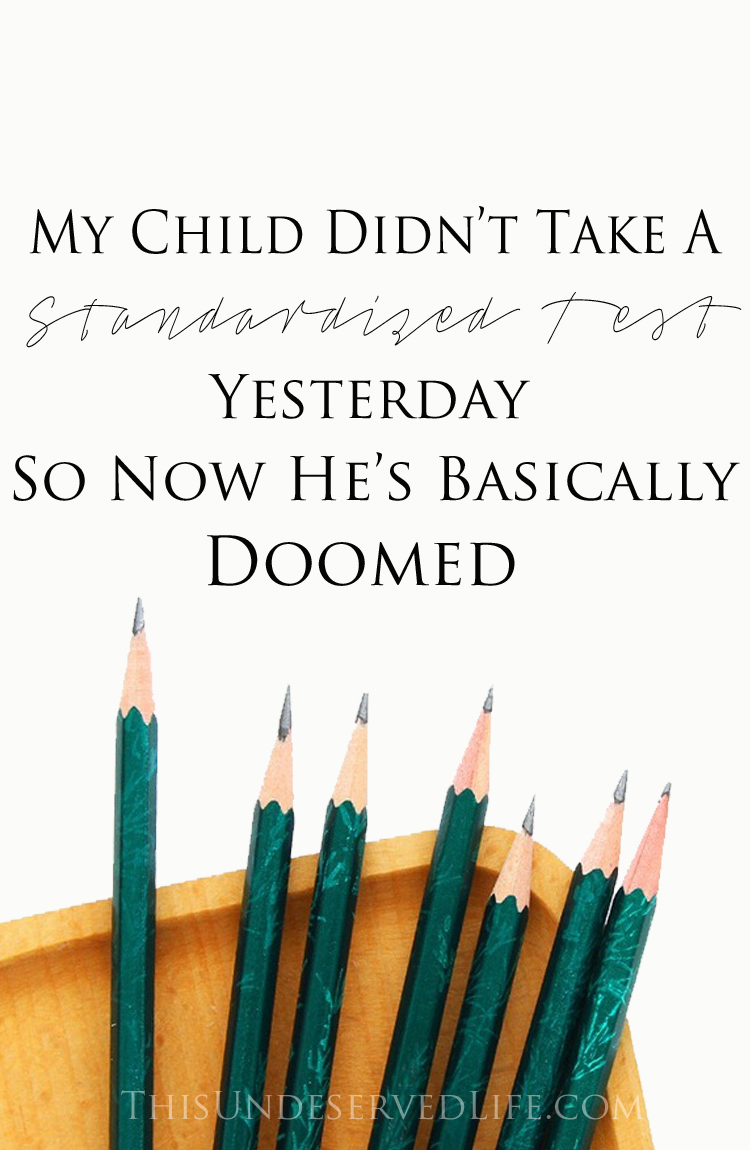 Across my great state yesterday, 4th and 5th graders gathered into hushed classrooms with bellies full of protein-packed breakfasts and sharpened pencils at the ready. Children in younger grades had their chairs removed from their desks so that the scraping sounds wouldn’t distract students rooms away, and parents were barred from visiting the campus: it was the first day of standardized testing in Texas.

My 10-year-old woke after a good night’s sleep, ate a big breakfast, and settled in with the book of his choosing. He played with his siblings, created with Legos, and even ASKED for veggies with his lunch. He had a great day… but was not at school. I opted him out of the test.

Being a 4th grader, he’s an old pro at the STAAR, the standardized test for Texas students. He’s taken the math and reading tests before (and totally crushed them, but that’s just the mom in me needing to brag on him). He wasn’t worried about the tests and he knew they didn’t define him as a student. He was proud of both his regular grades and his previous scores and shrugged off the idea that standardized testing was stressful.

Until it became stressful.

At the beginning of the school year his teacher bragged on his writing (insert proud mom puffing her chest out here). She was very excited by his ability, his creativity – he was a good writer. We began getting examples of what the STAAR test expected in a composition, and it was clear that my boy was doing well and would score high. He could use some tweaking to get the highest possible score, but that’s what school – and the next few months – were for, helping him grow as a writer and hone his skills.

To save you the novel it would require to share all the details, it became a nightmare right after winter break. The students – 9- and 10-year-olds – were writing a new paper every day to prepare for the writing portion of the standardized test. A paper a day. Each time with a new prompt that required new creativity yet had to follow the same formula. If a child didn’t finish they were made to miss recess to keep working on their paper. The paper that was just practice. If they still didn’t finish they would have to take it home and finish it, because a new prompt awaited the next day. It started taking longer and longer for him to finish. He’d come home exhausted, in tears, stressed over not finishing a paper that was just practice, a paper that’d be thrown out in the morning so he could start all over again with another. Despite our encouragement and praises – from his parents and teachers – his self esteem took a huge hit. He felt like a terrible student that he couldn’t finish quickly. He felt like he had no ideas because it took him so long to come up with yet ANOTHER creative paper. He allowed his worth to be dictated by this repetitive practicing and completely ignored the A’s he made in all of his regular schoolwork. He has a tic disorder that only appears when he’s stressed or ill, and his face was so overtaken by tics that he struggled to make it through a sentence at times. My boy was broken. His writing suffered. Where he’d started the year bringing home papers with high grades and excellent imagery, he began handing over papers that were not finished, that were pieced together according to a formula, that had no vision, and that weren’t even a shadow of what he’d been capable of before. He handed these to me with his head down, because he knew it, too. My 10-year-old was burned out. In the 4th grade. He was exhausted, spent, suffering. I felt like a failure as a mother for having allowed it to happen, for having bought into the “Suck it up, it’s just a test” line. Not all kids respond this way, but mine did, and I had to remind myself that I am his parent, not the school district, and not the businesspeople making millions off of the test.

So I opted him out.

We spent the day together like rebels – one homeschooled kid, one kid opted out of standardized testing, and one too young to be a part of any of it. We got stares. We got smiles. And we got a lot of questions. When it became clear just how very many parents were not aware that they could opt their children out of standardized testing, I took it upon myself to post on Facebook about it. The only city in Texas that has a formal opt-out policy also has the highest percentage of families who opt out, so I decided to get the word out, as it seems the more empowered parents are the more action they take. I don’t judge those who sent their kids to school, I don’t think all kids are being damaged by the process, I just wanted to make sure parents knew they had a choice.

And, apparently, I wanted to make sure my son never succeeded in life.

There were a few comments – and some surprising “likes” on those comments – that expressed concern over his college career and his character as an adult. Yes, my 10-year-old. Who is in 4th grade. Whether those comments came from a place of well-meaning, judgement, or just being wholly ignorant, I would like to address the sentiment and make a few things clear.

He is 10. He’ll only be 10 for 6 more months, and then he’ll be 11. He does not need to be prepared for college right now. Because he’s 10. He may not even choose to go to college. But whenever that decision comes, it’s the better part of a decade away.

Not taking a standardized test does not teach a child not to take tests. They take tests all year long. They have homework and projects and book reports and quizzes, too. They must complete those and show mastery of the content. Not taking this one standardized test didn’t teach him that it’s okay to wimp out on something that’s too hard and it didn’t create a habit of avoiding tests. It was a standardized test that, at his current grade level, does not affect his grades. He’ll continue to take tests over the material he is presented throughout his school career despite having missed this one.

The idea that a single test is an indicator of future character is absurd. My job as his parent goes a lot deeper and longer than a single test. Me standing up for him when something gets to be too much does not teach him he doesn’t have to deal with hard things – it teaches him that his parents support him. It teaches him that it’s okay to say “no” to something that isn’t good for you. It teaches him that sometimes when everyone else is doing something, that doesn’t mean you should, too. It teaches him that he can come to us when he’s faced with another hard issue, and it teaches him that he can trust us to help him through it. Not taking one test out of hundreds will not make him a flake, it will not relegate him to a lifetime of looking to mommy to fix his problems, and it does not render him powerless against difficulty. Character is an ongoing education in our home, one that gets a lot more time and attention than a single standardized test.

This is not 1997. The tests aren’t what they were when I took them. They’ve gotten harder, are riddled with grammatical and grading issues, and come with millions of unseen strings that tie teachers’ jobs and salaries to students’ performance… on ONE test. The stakes are higher, the tests are harder, the prep is more intense, and it is comparing apples to dragonfruit when we try to compare our own standardized testing experiences to those of children today.

Nobody really asked you. That was harsh, wasn’t it? Sorry about that, but it’s true. At the end of the day, no parent needs the permission of another or the blessing of your opinion to decide if they want to opt their child out of a test. Really. You don’t have to like it – they didn’t ask you to. You don’t have to agree with it – you’re welcome to send your kids with their number two pencils to take any test you wish. You’re more than free to feel passionately – and I pray you DO! But your passions are not my guide, and I’ll raise my child how I see fit, thankyouverymuch.

Standardized testing has nothing to do with college. Nothing. Colleges don’t request STAAR scores. To my knowledge there are no scholarships offered based on STAAR scores (especially to 4th graders). Are there tests in college? Sure. There are also tests in elementary, middle, and high school, all covering the material that was taught… like college. In fact, those tests are much more like the ones college students will face than a STAAR test. Valedictorians aren’t chosen from STAAR scores, standardized test scores don’t get you extra cords at graduation, and I really hope there are no fraternities that base membership on a 4th grade writing test. I don’t even think Jostens has a STAAR logo you can put on your senior ring…

At the end of this very long post, he’s still only 10. He loves his Rubik’s cubes, drawing on graph paper, playing board games, wrestling with his brother, laughing at movies. He’s growing taller by the day and thinks the little blonde hairs on his legs are very manly. He snuggles me on the couch, his table manners are questionable, and farts are the funniest thing in the world to him (though I’m pretty sure that’s not age-specific). He’s 10. He’s still a boy. There is no need to prepare him for adulthood, for college, right now. There is no need to push him beyond where is healthy for him to go. There IS a need to stand up for him and protect him from what’s not okay, from what’s harmful to him. He has the rest of his life to be an adult, I don’t need to push him towards it when he’s just barely reached double digits. Not that standardized testing has anything to do with being a functional adult, only that there is no need to push him towards something that will happen eventually, anyway. Missing this one test does not disqualify him from future success or doom him to a lifetime of watching old 90’s FOX reruns in the dark while eating potted meat from the can. He’s 10. We live in a developed society that allows him to be 10 and not worry about tilling fields or getting the black lung down in the coal mines. He’s not being prepared for adulthood, he’s being allowed a childhood.

At the end of the day, he went to bed. He wasn’t fearful about his future, I didn’t get any recruiters calling to cancel their visits, and knowledge didn’t tumble out of his head. He didn’t take a test. A very expensive stack of paper sits in a box, leftover because he wasn’t there to break the seal on it. The world will keep spinning, he will keep learning, and everything will be okay. I don’t regret our decision – in fact, I feel more sure of it than ever. We will face tomorrow – and any other tests, academic or otherwise – how we faced today: together.