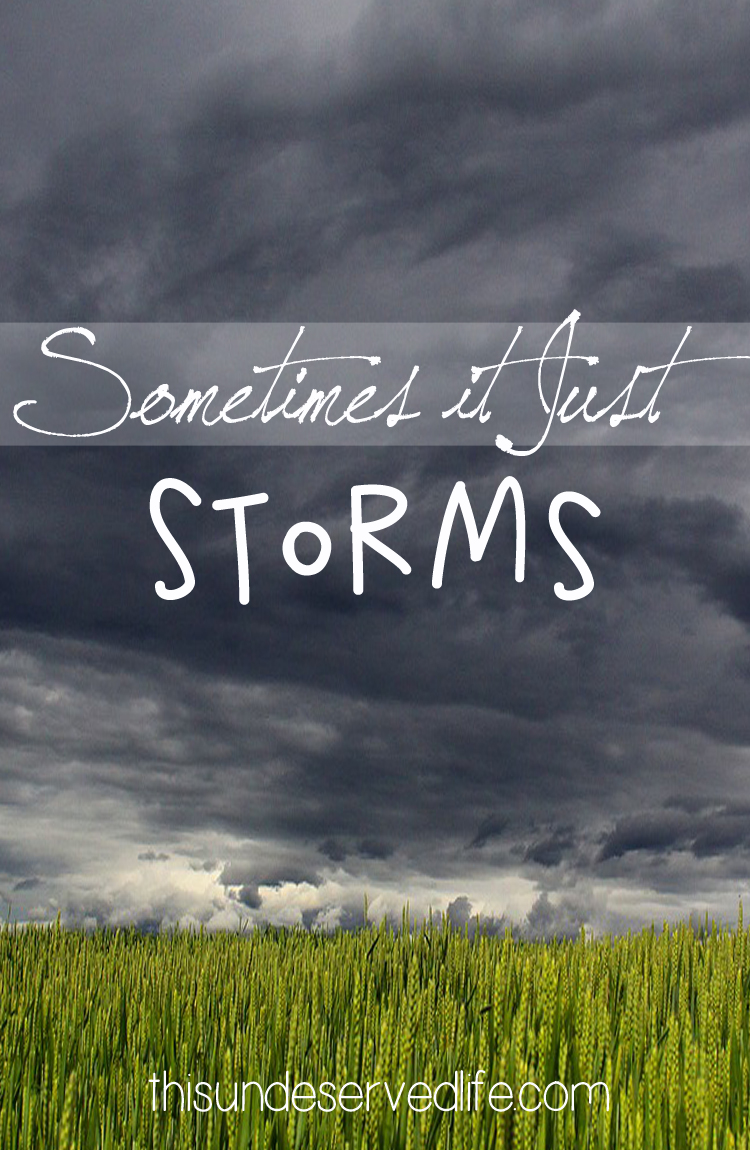 Years ago, my husband started a new job. It was in a new city with much better schools and a too-long commute that cost us almost as much in gas as we were paying for our mortgage, so we made the obvious decision to move. We listed our home and prayed for the best.  Then the real estate bubble burst.

We landscaped our home. We painted our home. People came, walked through, and left. We updated fixtures. We steam cleaned the carpets. Still no one wanted our home. We welcomed our second child and brought him home to a bare nursery, convinced we’d be moving soon. We lowered the price. We switched realtors. We tried Craigslist. We lived among boxes with no decorations on the walls for almost two years, always at the ready to be gone, move on. But no matter what we did, no one wanted our home. What we’d bought it for and what it was now worth with 7 foreclosures on the same street were just too far apart. No one was qualifying for home loans – fewer were even looking to buy. We waited, prayed. We had one car so I would be home all day with two boys, a baby and a toddler, with no transportation. My husband would leave in the morning while it was still dark and not get home until it was almost bedtime for the kids. We spent so much in gas that we had to get groceries from the food pantry. Once, my oldest son pulled a classic toddler move and busted his eyebrow open, obviously needing stitches, but I was alone, my husband was at an event over an hour away and didn’t have his cell phone on him. There were times the four of us slept in his office to avoid having to make the drive back home before another service or event. It was bad. We wanted so badly to be out of there, to get on with our life, to be rid of something that was once such a source of pride for us, but no one was buying.

Then one day someone was listening to me vent about not having sold the house and she asked me something that’s always stuck with me: “Do you think God hasn’t allowed the house to sell because you’re not supposed to be in that new city?”

Years before that, far back in my college days, a psychology professor of mine told the story of the time he was pastoring a church and several people brought a member to him, someone in need of immediate prayer. They believed this person who was foaming at the mouth and convulsing to be possessed. My professor immediately recognized that they were having a seizure.

Even longer ago, Jesus slept on a boat. A huge storm came up, waves crashed, and the elements threatened to capsize the boat. Terrified, the disciples with Jesus woke Him, who promptly spoke to the storm and calmed it.

What have I learned from these accounts? Sometimes it just storms.

How often we experience turbulence and immediately turn to the heavens and cry out, “Why?!”

The disciples on the boat with Jesus, rocking with the waves, feeling the spray in their face, seeing the clouds and clashing all around them, cried out, asking Jesus if He even cared if they drowned. They saw trouble and assumed it represented an emotion or intention on the part of God. Even though they were with Him, literally right next to Him, able to see Him and know He was real and with them, their first thought was that He was against them, or at least indifferent. How often we count ourselves in God’s company and begin assigning His will to storms, all the while forgetting his ability to calm it. Sometimes it just storms. Not because God is trying to drown you, not because God is trying to stop you, not because you haven’t prayed enough, but because it just does.

What would happen if, instead of crying out, “God, why is it storming?!” we steely spoke, “God, calm the storm.”? If we saw trouble ahead, found ourselves in the midst of hardships, and rather than seeing ourselves as victims of a God who has forgotten us, we remembered what He can do for us?

When Moses led the Israelites out of Egypt and they came to the Red Sea, they were forced to stop. Did Moses cry out, “God must have led us here to be slaughtered!”? Did he look at the water and say, “Welp, I guess all those plagues were off the mark – we probably should have stayed behind in slavery.”? NO! God did not put the Red Sea in front of them to stop them, He put it there to EMPOWER them. Because when Moses came to that water, the seeming dead end, he did not stop and whimper that it must be God’s way of stopping them, he lifted his hand and with the power of God saw those waters part. Suddenly what was once an obstacle was a pathway. What could have been interpreted as the end became an unmistakable beginning. Sometimes it just storms, sometimes there’s just stuff in the way, but every time God is able to overcome it.

Yes, sometimes bad things do happen because of the hand of God. Job is an example who easily comes to mind. The Great Flood was never just a storm. But look also at Joseph – sold into slavery, falsely imprisoned, the guy had every reason to think God’s will for his life wouldn’t come to pass. “It’s kinda dark in this pit my brothers tossed me into, I guess those dreams probably meant something else.” NOPE. Jacob, a man who literally wrestled with God, could have tapped out, could have justifiably thought God just didn’t like him, but would not let go until he got the blessing he KNEW God alone could give him. He walked away with a limp, but sometimes limps happen. A limp doesn’t mean God didn’t bless you – heck, in Jacob’s case it was proof that He had.

Because as much as someone can walk away from Jesus healed and whole, they can walk away from God limping and still have been blessed. Because as much as God can bring a flood to destroy, He can calm a storm to save. Because sometimes He wants to do something, sometimes He wants to show us or stop us or teach us or lead us. But sometimes it also just storms, and He has no motives. Jesus didn’t cause the storm on that day He was in the boat. God wasn’t smiting anyone. It was just a storm. And misinterpreting it did nothing to God’s abilities to calm it.

God has a voice. He speaks to us. It is not up to us to interpret what we see around us when we have every right to just ask Him ourselves… if only we’ll listen. If only we’ll stop looking for signs and just listen for guidance. If only we’ll stop assuming that everything happens for a reason. If only we’ll remember that the God who creates storms is also able to calm them. If only we will listen in patience instead of blaming in fear. If only we will pray with mercy rather than judge another’s storm. God is powerful, He’s mighty, He’s able and always, and yes, He can create a storm, be it in the form of weather or circumstance, rain or consequences. What He isn’t is mute. He does not only speak to us through trials and high winds. Do not be so quick to assign God’s will to an event that we give the storm more power than His voice. Listen to Him, not the rattling windows. Blame the wind, not the Father, when it storms. Stare up into the heavens, beyond the wall of clouds, and rather than wait to ride out the storm you think you’ve earned, call out to the One above it who can calm it should He desire. Or just let the rains wash over you, because sometimes it just storms.

So no, I do not think that God crashed the entire US real estate market to keep us from selling that house. He’s able, sure, but I don’t think He did. God’s pretty cool about making His will known, about speaking to His children. And I refuse to listen to the storm around me tell me what God wants to do when I could just ask Him myself. Because as you know, sometimes it just storms.