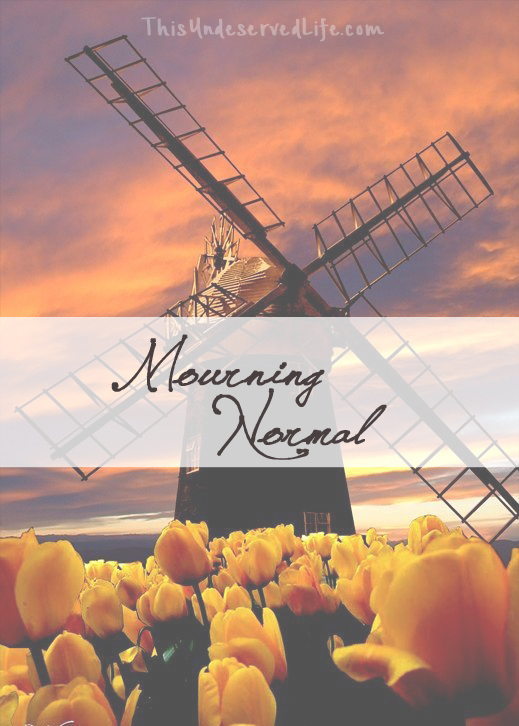 Yes, yes, I know – “Normal is just a setting on the washing machine.” There’s almost a resistance to the word “normal”, a visual bristling that takes place at the mention of it, especially when using “normal” as a measuring stick or comparison tool. “Normal” isn’t bad, it isn’t better, but it is, statistically, a thing. It’s real. It’s the middle of the bell curve, the average, the typical. It’s what’s to be expected, what’s been planned for. It’s the experience of most, and surprisingly the disdain of many.

It’s also a gift, as I’ve written before.

We grieve a lot of things in our lives – jobs, relationships, deaths, disappointments. Stories that ended before we were ready and stories that continue on in ways we didn’t expect. This is where I find myself today, mourning. Grieving the death not of a loved one, but of a future, of expectations. Coming face-t0-face with the very real differences between what I expected to be “normal” and what is my “actual”.

For some it may be life after divorce. For others it may be life after an accident or illness. Continuing on after the loss of someone incredibly close. Hearing, “It’s a boy!” instead of planning for pink. Being forced to envision your future in an entirely new and different way after the loss of your dream job, or never having landed the position at all. The circumstances are all different, but the feelings remain similar – you had a plan, it changed, and now you’re left not only reeling, scrambling, planning for the new future, but also feeling the aching hole left behind by your original future, the one you’d looked forward to, prepared for. Your “normal” is suddenly gone, and your present is something you never intended or considered. Your present is now, by definition, “abnormal”, at least from what you’d been anticipating.

For me, I’m mourning a “normal” childhood for my son.

We can call it “neurotypical”. We can call it “average”. We can reference the majority of the population and refer to him as an outlier, an anomaly, an exception. What we can’t call him is “normal”, though the life I’d envisioned for him was.

I started homeschooling him a few months ago for a few reasons, and it has been fantastic. We’ve had a blast, I’ve noticed so much relief in him, and he’s absolutely loving it – it’s been a good thing. However, last week a parent from his former class shared a slideshow of moments from the school year… and I lost it. Full on, snotty, ugly, moaning, sobbing cries. Seeing the smiles, the crafts, the parties, the memories – they caused me actual pain. I saw this typical childhood in a typical school and felt the most intense sadness. They were so happy. They were doing what so many other kids their age did. In my eyes, they were easy and normal. Was I romanticizing their school experience, as a friend pointed out to me? Absolutely. Were those experiences things my son was even interested in? No way. Would him being present for those things make him happy? A booming, echoing NO. But I was suddenly hit with such intense grief over the fact that normal hadn’t worked out. It didn’t negate how much homeschooling is working for us. It didn’t lessen my love or amazement at who he is. It was grieving for what ought to have been. Recognizing that my current path had strayed from my intended one, and while lovely, I hadn’t yet let go of my original travel plan. Something was over, and no matter how poor of a fit it was, it brought me grief to know that it had ended, that is was no longer an option.

It’s popped up before, this grief, and I expect it will pop up again. And the thing about it is, it’s okay. It’s okay to grieve. It’s healthy to mourn. Mourning is not regret. Letting go of what might have been is not taking your current reality for granted. Being sad something didn’t work out, feeling the pain of that end is not wishing your present, wasn’t. You can be both sad at what is gone and appreciative of what you have at the same time. The tears that fell over knowing I wouldn’t see my son smiling in those photos did not erase the photos I have of him smiling with me. The tears just fell, and it was okay.

Grieving normal requires learning to think in new ways, retraining your reactions. Not many people start out their journey hoping they’ll abandon their destination and end up somewhere else entirely. The habitual way you think and react and plan has been practiced for a very long time, and now it doesn’t fit with your life. You may mourn normal every time you have to make a hard decision – at the very least you’ll be reminded of it. I once heard a beautiful analogy relating to the parents of special needs children that I feel fits so well to many, many more situations:

Imagine you’re planning to move to Paris. You pack your chicest clothing, research the museums, the language, the culture, the food, the rues. You tell everyone where you’re going and you imagine your exciting life once you get there. Only upon exiting the plane, you find that you’ve somehow landed in Holland. Huh?! Holland is not Paris. You’re shocked. You’re sad. You’re completely unprepared for Holland. You don’t know the language. You don’t know the customs. You know nothing about the food, the maps, the people. Your clothes are wrong, your plans can’t happen, yet here you are. You are now in Holland, for better or worse. You long for Paris, you may even declare intense hatred for Holland simply because it isn’t Paris. But slowly, slowly, you being to learn about your new home. You absorb the culture, begin to assimilate. Holland doesn’t have the Eiffel Tower, but it does have windmills, and tulips, and it’s very peaceful there. Your friends come to visit from Paris and don’t understand it, but you go to visit them and find that Paris is loud, crowded, and a little smelly. You grow to love Holland, despite it never having been on your radar, and you appreciate your new life for what it is, find peace where you are, and are happy. Holland is never going to be Paris, but that’s okay.

Here is something I must stress, whatever normal you are mourning – GRIEF IS NOT GUILT. Feeling sad about the sudden change in your future does mean you are responsible for it, it does not mean you caused it, it does not mean you can change it. No matter how strong your feelings are, they cannot reverse anything. Do not trick yourself into feeling guilt over your situation or guilt for your grief. Feel your feelings. Identify your feelings. Accept them, work through them. You can change the way you think, but you must embrace how you feel in order to move forward. Assigning yourself guilt is not a punishment for experiencing grief.

Find someone you can talk with about your feelings. It may take a few tries and you may only find one person, but keep trying. People will say stupid things. I’ve written before about how we often attempt to measure the pain of others – it will happen. You will hear dismissive comments about the things you DO have that you SHOULD be grateful for. Don’t allow them to shame you into guilt. Don’t allow any statements that begin with “At least…” to bury your feelings. You know that being sad over what isn’t to come does not mean you are not grateful for what is. The thing about winding up in an unknown foreign territory, metaphorical or otherwise, is that it is terrifying. Sometimes you have no idea what to expect. Sometimes you DO know, and that’s even scarier. Change is hard, unexpected change is harder. But finding someone who can listen will at least mean you aren’t alone.

Mourning the end of your marriage doesn’t mean you want your ex back. Grieving the diagnosis your child received doesn’t mean you love them any less. Crying because you got a boy doesn’t mean you wish he’d been a girl. Remembering life before kids isn’t overlooking or disregarding the miracles that they are.  Missing your old home doesn’t mean you wish you hadn’t moved. It’s grief, it’s an end, it’s saying goodbye to what you thought your future would be as you learn what your new present is. It’s part of the process of letting go of what was “supposed to be”, what was your “normal”, and finding yourself in uncharted territory. Mourn that normal. Multiple times. And while your tears are still wet on your cheek, tell someone you trust how you’re feeling.

Whenever I feel inspired to write a post here, I typically write down some notes in a journal I keep. I think about it for a long time, I pray, I research when necessary. I have dozens of posts just waiting to be written, with rough ideas and random thoughts jotted down. But this post was different. I kept trying to make the time to sit and pray about it, to ask for wisdom. I was waiting for a time when I felt absolutely joyous about the current state of abnormal we’re in, so that I could offer some hope from the other side perhaps, so I could have a cute little sign-off, something to share that would inspire, lift, encourage. But it never came. Every day since that slideshow has been hard. Tomorrow will probably be hard, too. I began to feel very discouraged at it all. Why wasn’t it getting better? Why wasn’t I feeling more hopeful? Was I the world’s biggest hypocrite for wanting to talk about mourning normal and feeling this way? It hit me today – I was waiting for normal to return. I was waiting for this state of abnormal to stop being so abnormal so that I could write about it. I wanted it to feel normal while I discussed how it wasn’t. And so I grieve again, because mourning normal isn’t a period you go through, it’s a change in your lifestyle. It’s not a season, it’s a shift. Despite all my words, I still wanted normal to come back, and it just isn’t going to. And that’s sad. And that’s okay. I know over time this abnormal will become my new normal. I know over time I will feel that punch in the gut become softer and softer, with fewer and fewer blows. I know that we have made the right decision. But today, right now, in the middle of the sadness and fatigue and tears and doubts, I am sad. Not regretful, not ungrateful, I am in mourning.